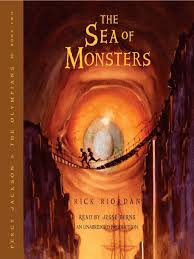 The book Percy Jackson and The Olympians the Sea of Monsters written by Rick Riordan is a fiction book that has a great setting. Percy Jackson has been at his school all year without interruption by monsters. During his last day of school, at gym class, Percy and his friend Tyson become in a dodge ball match with Cannibal giants. Cannibal giants are huge monsters that could rip you to shreds in a matter of seconds. (cool right) Annabeth, Percy’s friend, shows up to the dodge ball match and Percy gets confused. After the match ended and Tyson saved the day with his magical heat touching hands, Percy, Annabeth, and Tyson headed off to Camp Half-Blood with the fear that something major was about to happen. Once they got there they realized that the magical boarders that protect Camp Half-Blood have gotten poisoned. Annabeth, Percy, and Tyson realize that they are going to have to go on a quest to find this magical fleece that will save the camp. The only problem is that they aren’t supposed to leave Camp Half-Blood according to Chiron, an important leader within Camp Half-Blood. What will they do in order to save the camp. Will they leave and disobey orders and risk getting suspended, or will they stay at the camp letting others take over the quest?

I thought that the writing style of the book was just my type because it was so suspenseful and exciting. I really like the Percy Jackson series because it doesn’t allow you to put the book down even for one minute. I also like how the author kept making major twists that you never would see coming!My overall response of the book would have to be that it is interesting. I think it was so appealing to me because I enjoy fighting and intense situations without the goriness that some books offer. The Sea of Monsters provided just that for me which is why I was so happy with the book.

One thought on “Percy Jackson and The Olympians: The Sea of Monsters”